Agnosticism: The most Egregious Form of Fence-Sitting 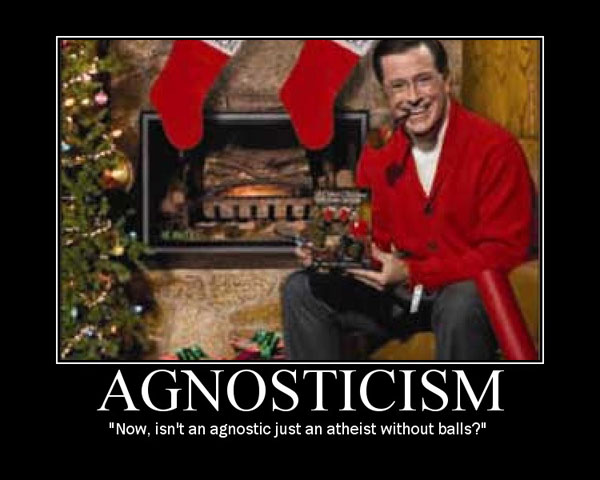 Wiki defines Agnosticism as “the view that certain
claims—especially claims about the existence or non-existence of any deity, but
also other religious and metaphysical claims—is unknown or unknowable.”

But how valid is this position really? Does anybody actually know for certain that
God does or does not exist? I mean 100%. Can these people give compelling
logical proofs or disproofs?

Not even the infamous anti-theist Richards Dawkins claims to
know 100% that God does not exist. What about theists? I’m a devout Christian,
but I can’t say that I know for sure. In fact if you press most Christians hard
enough, they too will admit that they don’t know for certain.

This may surprise many atheists, and some Christian’s may
recoil at the mere suggestion. But what we have to remember is that Christ
never said that admission to Heaven requires certainty, in fact the totally opposite is true. Christ constantly
stressed the importance of faith in the Salvation that is given by God (Matthew
25:21, Mark 5:2, Luke 5:20, Luke
7:50).

No demand was made for 100% certainty. How can anyone be
100% certain when our fallen, sinful existence is defined as being divorced
from God’s presence?

So if both atheists and theists admittedly only hold their
positions by faith, then where does this lead the agnostic? It seems as though
it leaves him in an untenable intellectual position.

I can understand the agnostics who are genuinely perplexed and ambivalent as to the
existence of God, but it is those agnostics that try and define Agnosticism as
a legitimate belief system in itself that I find frustrating. It is a refusal
to even genuinely debate the matter. It is a pusillanimous refusal to put ones
neck on the line.

But what these types of agnostics don’t seem to realize is that their neck is on the
line whether they like it or not. Either God exists or He doesn’t; when your
last breath departs from your lungs, you will quickly find that there is no fence
to sit on after all!

I have a ravenous hunger for knowledge, thus my library has a large range of literature, from modern history to modern social issues, science to religion, and almost everything in between. The only genre that I don’t read is fiction, I can’t help but think there is too much knowledge out there to be learnt to waste time reading fictional stories
View all posts by theoldwiseman →
This entry was posted in Uncategorized. Bookmark the permalink.